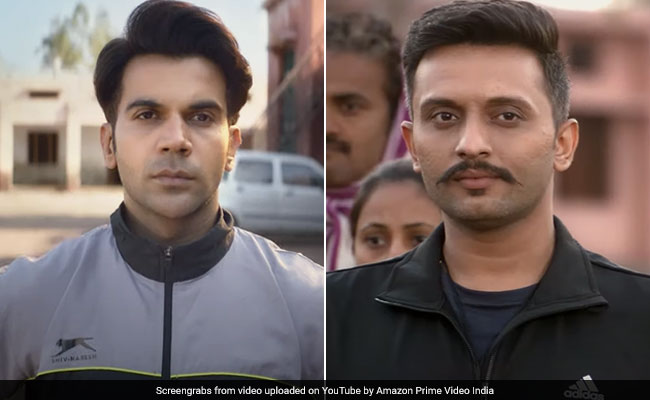 Chhalaang Trailer: A still from the film. (Image courtesy: YouTube)

The makers of Chhalaang dropped the trailer of the film on Saturday and it is all about Rajkummar Rao and Mohammed Zeeshan Ayyub’s fight for pride. The duo feature as PT teachers in the film that also stars Nushrat Bharucha. The first half of the trailer shows how Montu (Rajkummar Rao), a “typical PT Master for whom it’s just a job,” falls in love with fellow teacher at his school – Neelu (Nushrat Bharucha). However, his life takes a new turn after another PT teacher – Mr Singh (Mohammed Zeeshan Ayyub) – arrives at the school and becomes the villain of Montu and Neelu’s love story. The second half of the trailer shows that Montu, who loves his job but cannot sacrifice his pride for it, is hell-bent on defeating his senior PT teacher and for that, he starts training his students for a tough competition – a competition for pride.

The trailer also features glimpses of Satish Kaushik, Ila Arun and Saurabh Shukla. Chhalaang has been directed by Hansal Mehta and co-produced by Ajay Devgn, Luv Ranjan and Ankur Garg.

Sharing the trailer on social media, the makers described the plot like this: “Chhalaang is a hilarious, yet inspirational journey of a PT Master from a semi government funded school in Northern India. Montu (Rajkummar Rao) is a typical PT Master for whom it’s just a job. When circumstances put everything that Montu cares for at stake, including Neelu (Nushrat Bharucha) who he loves, Montu is forced to do what he has never done – Teach. Through Montu’s journey, Chhalaang humorously addresses the value of Sports Education in school curriculum.”

Watch the trailer of Chhalaang here:

Chhalaang was initially scheduled to release on January 31 but the makers three times before finalising November 13 as the final release date. It will premiere on Prime Video this Diwali.

Chhalaang will mark Rajkummar Rao’s sixth collaboration with Hansal Mehta. The duo have previously worked together in Shahid, CityLights, Aligarh, and Omerta.

US budget gap triples to record $3.1 trillion on virus relief

Sidharth Malhotra, Back At Work, Shares BTS Pic From The Sets Of Shershaah

Desire Paul Oct 20, 2020
Hoodlums have again hijacked what was supposed to be a peaceful protest in Lagos, and burnt down Orile…
DeeNews

Actress, Joke Silva reveals how she discovered she was an adopted…

Sidharth Malhotra, Back At Work, Shares BTS Pic From The Sets Of Shershaah

We will ensure that it reaches to everyone soon

Desire Paul Oct 20, 2020
French teacher Samuel Paty was beheaded by an attacker who was shot dead by policemen.Paris: A man who beheaded a…
Around the World

China Protests To US Over Appointment Of Special Coordinator Robert…

WhatsApp Web to get voice, video call support among other features:…

OnePlus’ 9 series is in the works under codename…

US Justice Department hits Google with biggest antitrust lawsuit in…

When to Watch NASA’s OSIRIS-REX Mission to Bennu Asteroid

Sidharth Malhotra, Back At Work, Shares BTS Pic From The…

They Said It: Week 6